We are well into the new Roaring Twenties, though those first few years of the decade didn’t really feel like much to roar about (thanks, pandemic). But now that travelers are preparing to roar again, what better place to kick off your 2020s travels than at a hotel that pays tribute to the same decade, but from a century ago. These ornate Art Deco properties conjure the inspired décor, experiences, and modern comforts of the 2020s, but with the distinct feel of the 1920s. That means you can channel your inner flapper, and still have all the technology necessary to capture it all on Instagram! 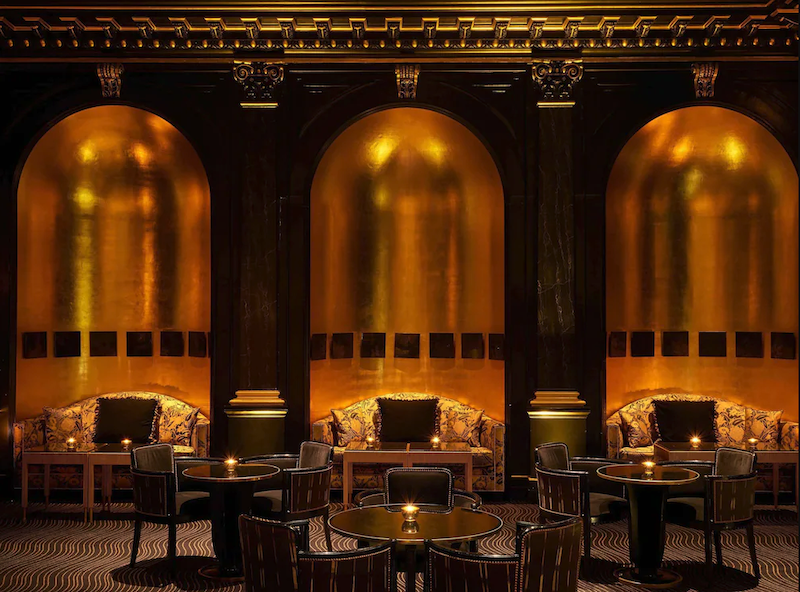 Photo courtesy of The Savoy London

The Beaufort Bar at Savoy London has a decadent black and gold Great Gatsby vibe, but the whole environment at this classic London property will let you feel like you are stepping back in time, as the band plays the classics from the foyer next door while you sip your champagne from your velvet club chair. 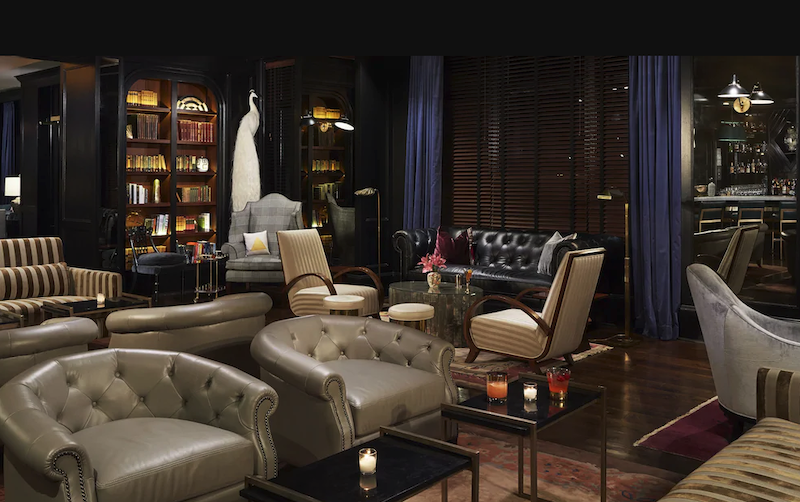 Photo courtesy of The Spectator

This hotel is great at mixing Art Deco style with a touch of southern charm, in a way that simultaneously conjures retro glamour and homespun style. The Spectator‘s lobby is outfitted with vintage furniture and abstract art pieces while The Bar, the hotel’s Prohibition-era inspired cocktail lounge, pours classic hand-crafted cocktails paired with Southern-inspired bites. Say hi to Daisy Buchanan, the hotel’s resident peacock found hidden in the corner. 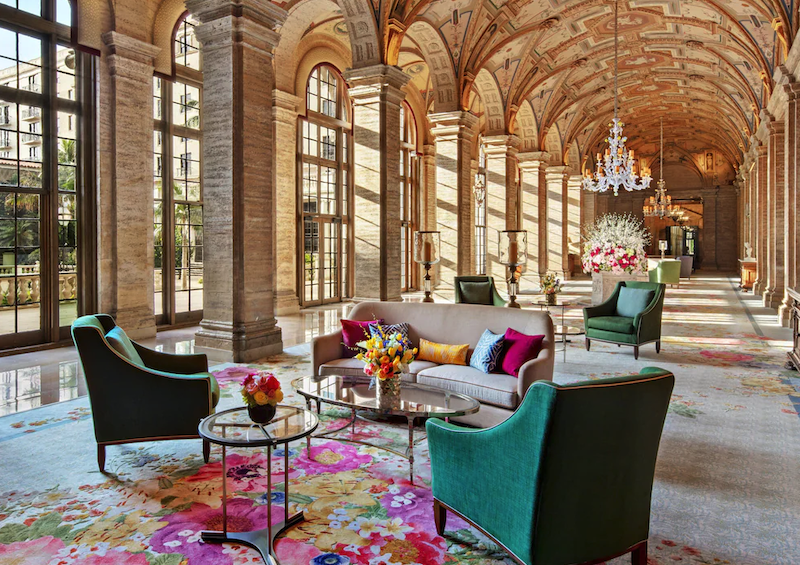 Photo courtesy of The Breakers

While this timeless property first opened in 1896, it was rebuilt in 1926 after being ravaged by fire, and designed with full inspiration from the Italian Renaissance. Today, The Breakers remains the only large hotel in the U.S. over 100 year old and still under the same original family ownership (heirs of founder Henry Flagler). It thrives independently of any chain affiliation and boasts a timeless, retro-glamorous feel.

The Fairmont Royal York has been around since 1929, and its decor pays tribute to the golden age of railway exploration. They’ve also been serving Afternoon Tea in the Library Bar since the beginning. It just so happens to be where the royal family stays when they’re in the city as well! 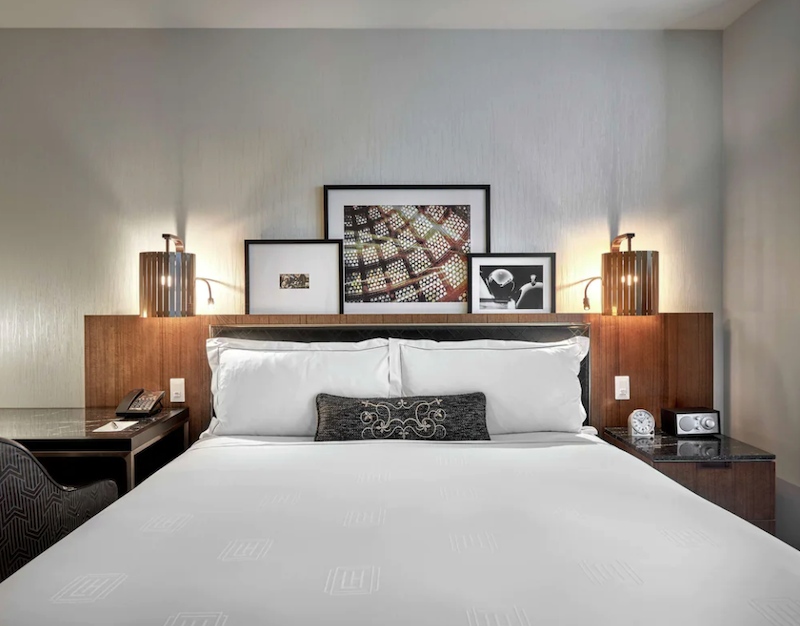 This hotel, housed in the 1923 London Guarantee Building, has a design inspired by building’s 1920s, including ornate Art-Deco interiors. Keep your eyes peeled for the signature traits of the architectural style, like intricate geometric themes and even lighting resembling flappers’ beads. Don’t miss LondonHouse‘s Jazz Age-inspired bar on the 21st floor.

The Seelbach “Hilton” Hotel was built in downtown Louisville in 1905 by brothers Louis and Otto Seelbach, and has an old world feel with turn-of-the century Beaux-Arts Baroque architecture. It was this same hotel where F. Scott Fitzgerald met notorious bootlegger, George Remus during Prohibition; the meeting inspired the character Jay Gatsby from his 1925 novel The Great Gatsby. The most legendary gangster of the 1920’s, Al Capone, was said to have secret passageways out of the hotel for an easy escape when playing cards or illegally bootlegging. In 1907 after an initial expansion, the Rathskeller was added to the basement of the hotel. It even has a Bavarian-style cellar made of Rookwood Pottery and one of the only remaining ensembles of its kind.

The Fontaine is a top luxury boutique hotel in Kansas City, a town that flourished with illegal alcohol, bootleggers, and speakeasies in the 1920s. In celebration of the Roaring Twenties, Parker at The Fontaine even offers a twice weekly “Prohibition Nights” event that intertwines the speakeasy concept and a sophisticated ambiance where wets and dries can come together for a bees’ knees of a time. 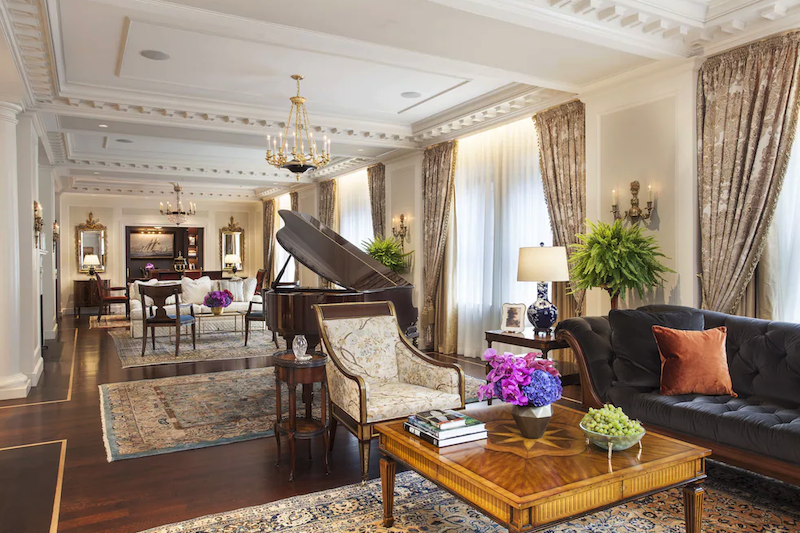 Photo courtesy of The InterContinental

The Vanderbilt family funded this luxury Manhattan hotel,  which opened its doors in 1926. Originally planned as part of Grand Central Terminal’s design plan, it’s now a window into 1920s New York glamour with features like a Carrara marble grand staircase in the lobby and eagle medallion door plates for each guest room. Among its many notable former guests are movie greats from days of yore such as Bette Davis, Mary Pickford, and Marlon Brando.