For many of us, Montreal represents a slice of “elsewhere,” thanks to cobblestone streets, narrow alleys, and shop signs written in French. But Quebec’s largest city isn’t just a repository for mere escapism—after all, two million people call it home, which means the food, culture, and resources of a big city are also at your fingertips. And given that it’s only a short plane ride away pretty much anywhere in the U.S., you can see a lot in just a single weekend. Here’s how to hit the ground running.

RELATED: Canada’s coolest towns in every province and territory 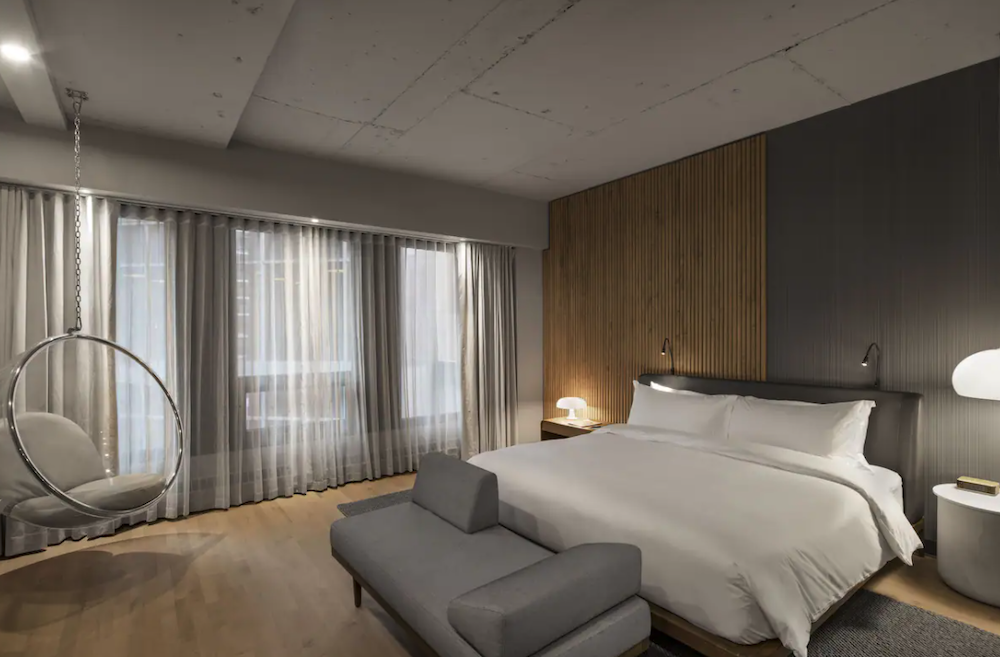 Aim for an early check-in at Le Germain hotel. The newly renovated digs at this boutique accommodation feature fabrics, shapes, and even in-room swinging chairs chosen to evoke the glamor of the 1967 International and Universal Exposition. Avoid flopping onto their oversized beds (that’s for later). Instead, hit the shower and freshen up with woodsy soaps and shampoos featuring a fragrance created by Canadian model Ruby Brown. 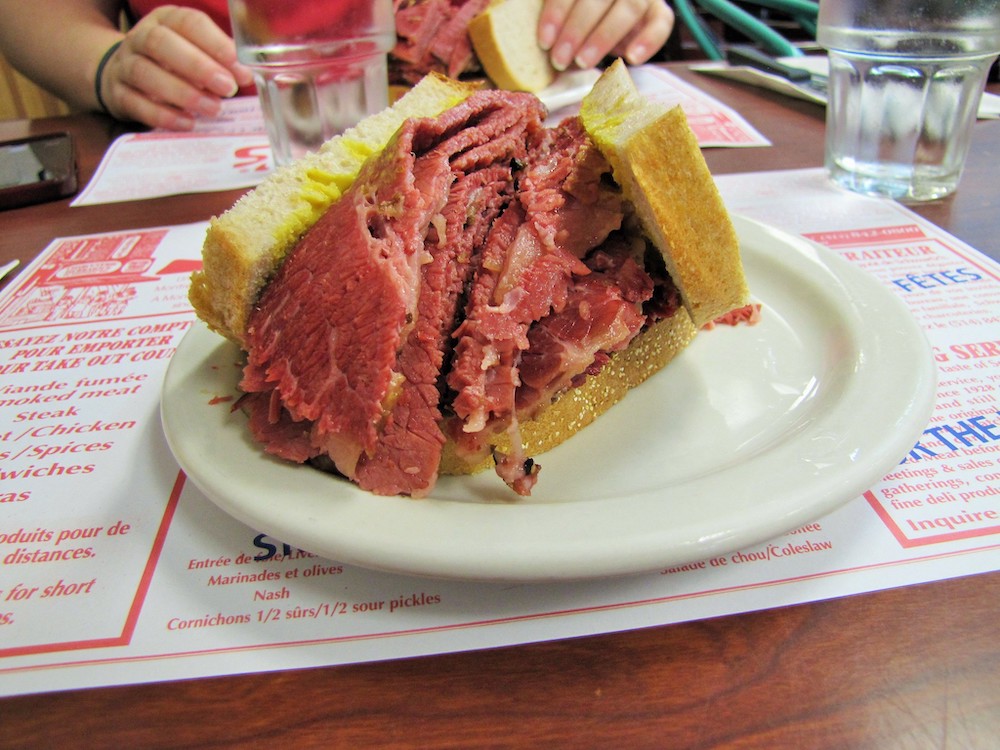 If you’re looking for the authentic city served with a side of meat, head to Schwartz’s Deli. (Vegetarians, try LOV, Foodchain, or Aux Vivres instead.) This staple in the Jewish Quarter has been serving up structurally oversized sandwiches and plates of fries plucked right out of the oil for more than 90 years. The lines can be intense, so consider sitting at the counter where you can watch the show unfold. Or grab takeout and head to one of many picnic-ready parks.

Since 2012, the Plateau neighborhood just off Boulevard Saint-Laurent has hosted Mural, a festival where street artists from across the world create original, wall-size art. Even if you’re not there during the June festivities, it’s worth a wander to see tributes to the late Montreal-based artist Scaner, a tribute to Jackie Robinson (who first played for the Montreal Royals), and Kevin Ledo’s purple-hued, can’t-miss tribute to the patron saint of the city, Leonard Cohen.

Just because you’re on the run doesn’t mean you have to sacrifice a little pampering. Newly revamped Holt Renfrew Ogilvy department store is Montreal’s go-to for high end fashion; it not only hosts the city’s largest collection of luxury brands, but also offers personal shoppers and car service between satellite locations. But the real treasure is the skincare-centric basement floor. Book a complimentary facial, where an expert will get to work in one of their dark and utterly relaxing treatment rooms. Head to Parc du Mont-Royal to see the hilly expanse of nature that the city was named after. If skiing, jogging or hiking is your thing, rest assured there’s plenty of land to make that happen. But even if you’re not in training, the five-minute stroll to the lookout, located 764 feet above the city, yields stunning sunset views which include The Leonard Cohen Crescent Street Mural. (That’s right, Montreal has two tributes to the poet-musician.)

8pm: Have a campfire dinner

Even short trips should have at least one fancy meal. Foxy combines high-end dining with open-flame cooking to create steaks, salads, and decadent desserts that are equal parts campfire-nostalgia and upscale.

Still got some life left in you? Head to Ti-Agrikol for a nightcap. Owned by Win Butler and Régine Chassagne (yes, of Arcade Fire fame), the Gay Village-area eatery and bar is a tribute to Chassagne’s Haitian heritage, which informs everything from its brightly colored walls, to the fruit-infused rum cocktails. Given the owners, expect a continuously awesome soundtrack.

Get some rest—you’ve earned it. Additional hotels include the ultra-sleek Hotel Monville, a high-tech stay that features room service robots. If Old World charm is more your bag, cuddle up at Hotel Nelligan, featuring boutique bedding, exposed brick walls, and easy access to the Old Port. 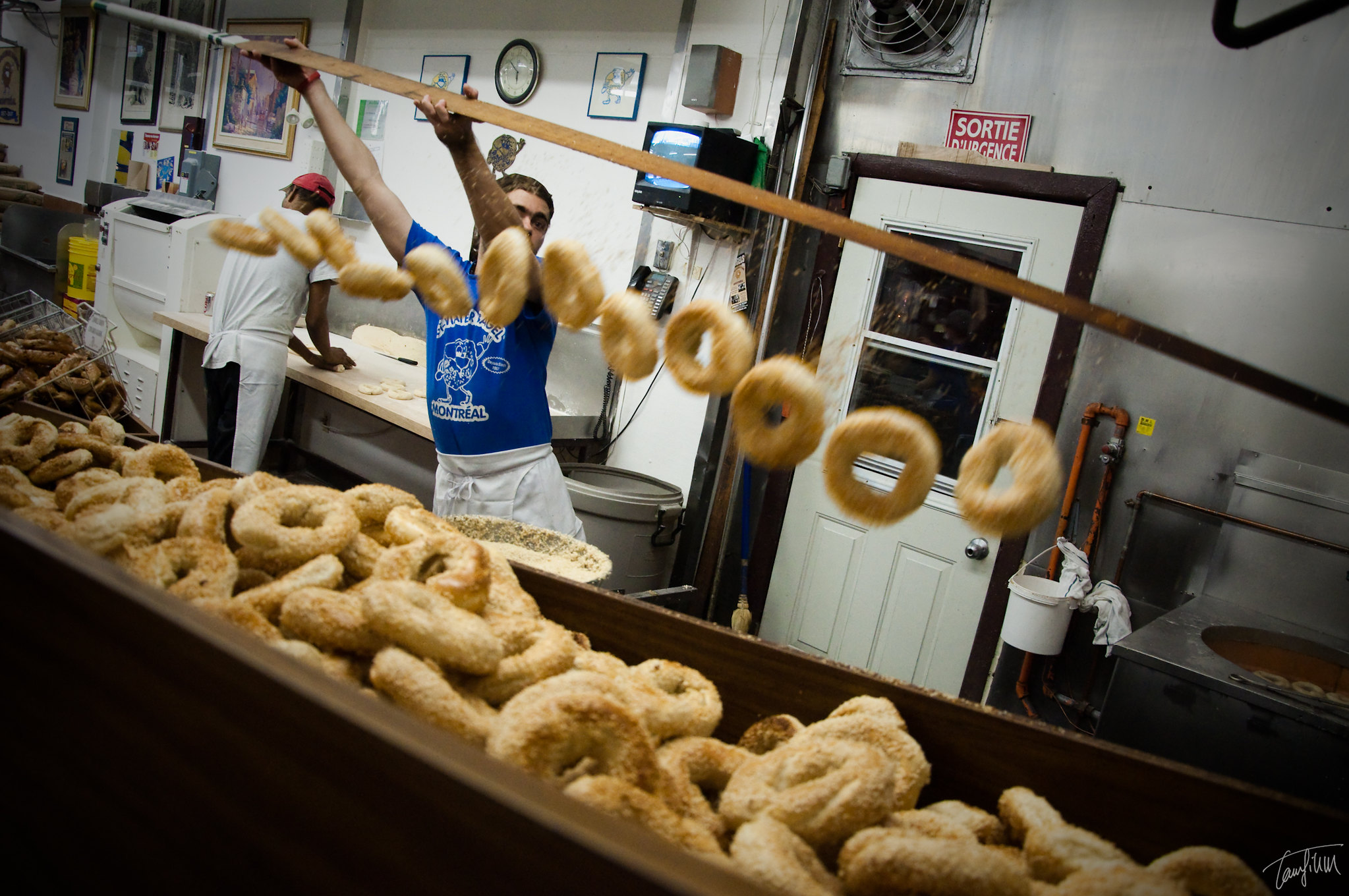 Join Montreal’s on-going bagel battles. For residents of Mile End, it comes down to two bakeries—Fairmount and St-Viateur Bagel. While devotees will passionately argue the perks of their chosen store, both institutions have been cranking out hot, delicious loops of bread 24 hours a day for nearly 100 years. (And quite honestly, you can’t go wrong with one from either…or both!) 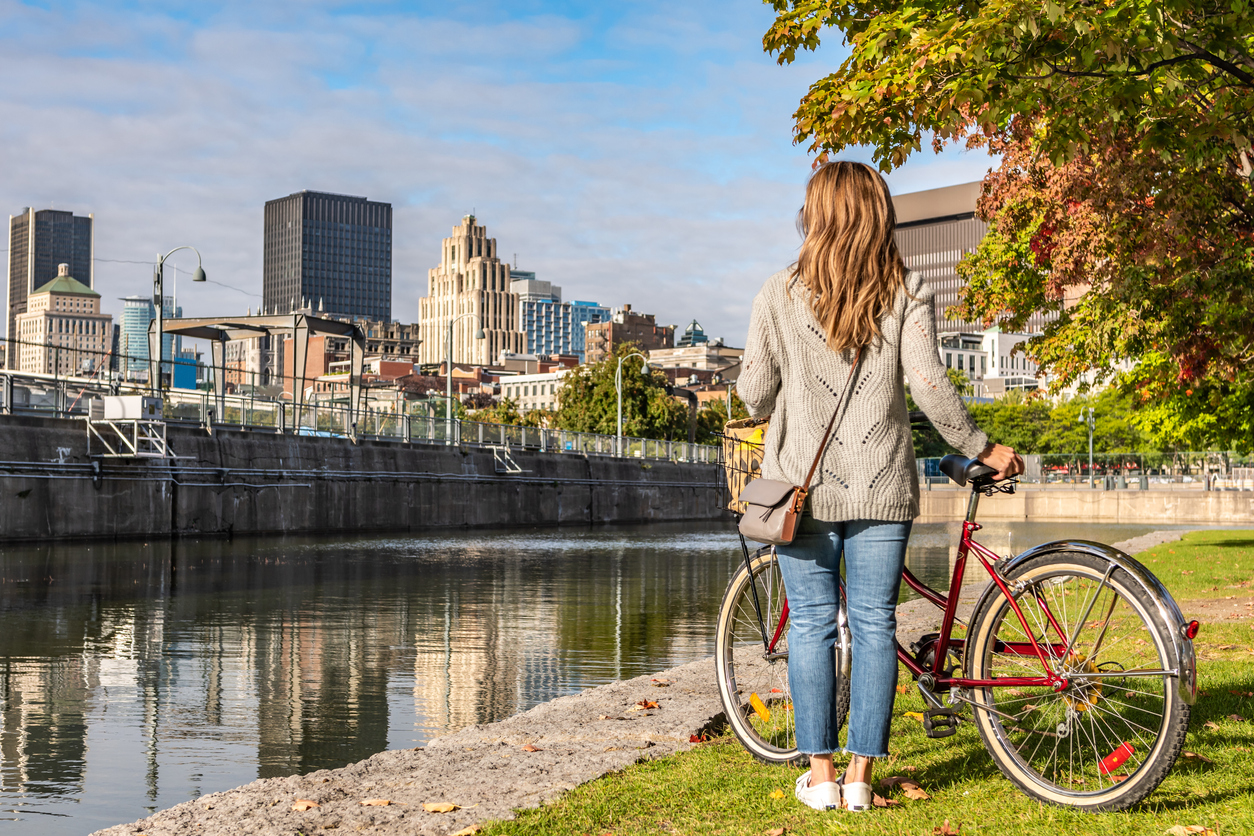 Biking is a way of life in Montreal and with plentiful bike lanes, it’s beginner friendly too. Rent a bike or join up with a guide from Fitz and Follwell, who offer themed seasonal tours such as family-friendly or even spa-friendly rides. Bonus: Montreal is one of the few cities where guides have to be licensed, which means any tour will feature a heavy helping of history in addition to fun personal facts.

Popularized in the 1950s, poutine is a Quebec-born staple that combines fries, gravy, and cheese curds. While everyone and their tourist cousin swears by La Banquise (which for the record serves up multiple variations of the good stuff 24/7), consider instead a stop at L’Gros Luxe in Mile End, a vegetarian’s dream with multiple varieties on the theme, and a seemingly endless number of add-ons.

Why rush around when you can indulge in a bit of well-earned passive sightseeing? From the hot tub at Bota Bota, a floating boat spa anchored in Montreal’s Old Port, see a number of the city’s most iconic sites without lifting a single pruney finger, including the brutalist Habitat 67 building, the Farine Five Roses sign, and the biosphere from the Expo 67 world’s fair. Complete their water circuit (hot, cold, rest, and repeat), then toast to the city with a glass of rosé from the spa’s in-house bar and restaurant. 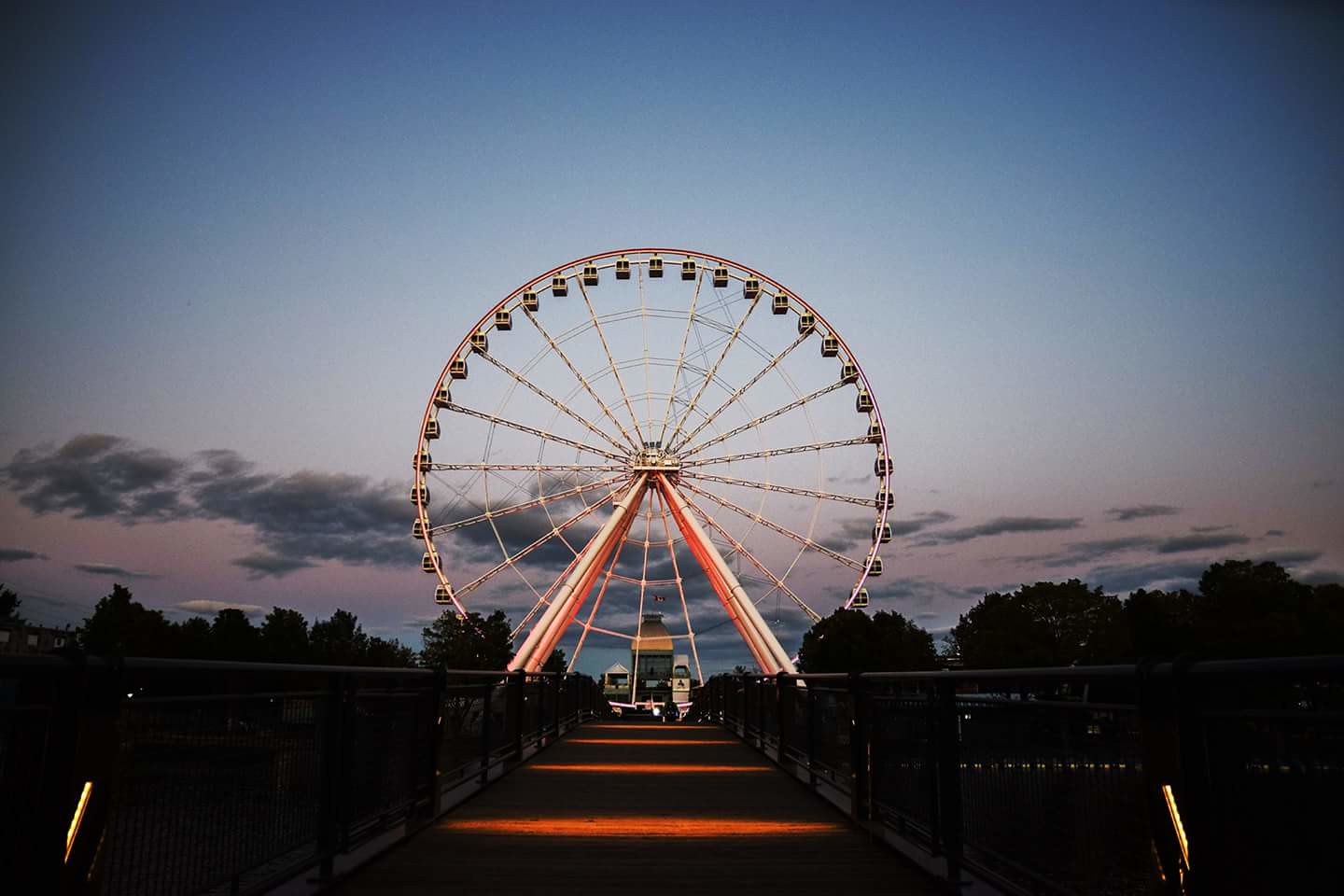 Take your newly relaxed self just a little further down the Old Port to The Montreal Observation Wheel, which sits just off the St. Lawrence River. (Don’t worry—you’ll know it when you see it.) The high-tech Ferris wheel features climate and sound-controlled cars that lift guests 60 meters into the air. (Read: perfect bird’s eye view.) Craving next level adventure? Request glass-bottomed car 42!

8pm: Have it all…and then eat it

Skip the “where to eat” battle and head to Le Central, one of Montreal’s newest food halls, located downtown just off Quartier des spectacles. Tacos, Indian, pizza, pasta, mini doughnuts, and a bar? This place has it all. (You read that in a Saturday Night Live-adjacent voice, didn’t you?)

The Cold Room is an Old Port staple, a dark speakeasy staffed with the kind of bartenders who cannot and will not be flummoxed by your order, no matter how complex the cocktail. For the ultimate local experience, be sure to try “The Montreal,” a mix of gin, whiskey, Aperol, and Suze liqueur, all selected to represent the multicultural nature of the city.

Wait, there’s more:  Montreal is a city of festivals, and it’s rare to have a month go by without some kind of celebration, even in winter. Foodies will appreciate Yul Eat, music fans will flock to Pop Montreal and Osheaga, and winter fanatics and art appreciators will enjoy Nuit Blanche and Montreal Snow Festival, both of which light up the colder months with outlandish creative installations.